A pre-note:
Mysore Pak is said to be a tough recipe to learn.Some say its timing, some say it's the measure of ingredients etc etc..and I tried to make it a lot of times too.Shobha ji & I were discussing about how to perfect this recipe but somehow, neither she nor I could ever come around to making it.This Diwali,I have been on a mithai-making mania (hee hee) and I told mom, let's us make more sweets but less quantity.So we took a Sunday off from cooking,requested Papa to order lunch from outside and we dove into our mithai making spree.(marathon? ;-)) 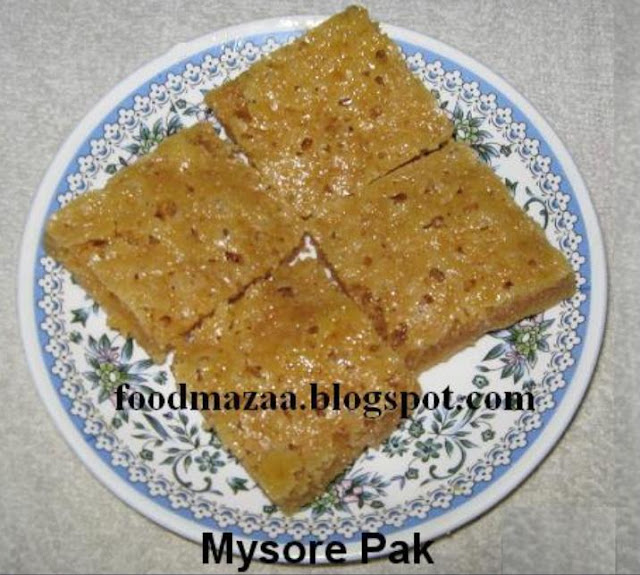 The Mysore Pak was incidentally the best sweet to come out of our efforts.I was so apprehensive of the result that I did not take too many photos while making the recipe.But I will try to explain it as clearly as possible.

Method:
1. Melt ghee & keep aside.
2. Heat 1 tbsp ghee (from the given qty) in a pan and roast besan in sim until raw smell goes away. Do not let it turn even light brown. It has to be the same color, only the smell goes away.
3. Keep aside.
4. Take sugar in the pan, add the water & boil until the consistency is of a thick 1-thread.
5. Add 1 tbsp ghee to it. Mix well.
6. Add 1 tbsp besan & see the froth coming up.
7. Add the entire qty of ghee now, mix well.
8. Add the entire qty of besan also, and mix both until everything is mixed up evenly and the mixture starts thickening visibly with bubbles.
9. At this stage, when the bubbles grow bigger and thicker,
IMMEDIATELY TRANSFER THE CONTENTS INTO A GREASED THALI. 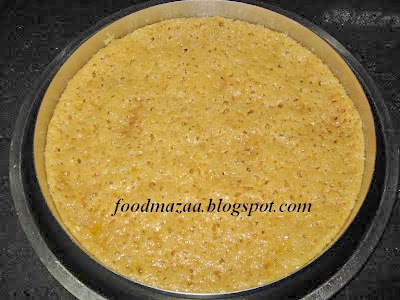 After it sets, you may cut it into cubes and serve.
The color keeps darkening even after transfering into thali. Thats y we musn't brown the besan while roasting.
The trick is to make sure that once it expands, it doesnt go down again. The other methods that tell u to add spoon-by-spoon of besan & ghee actually kill the whole purpose.The expansion has to be only once.As soon as it comes to its full height, its supposed to go onto the plate.
So all the best with this version of Mysore Pak!!