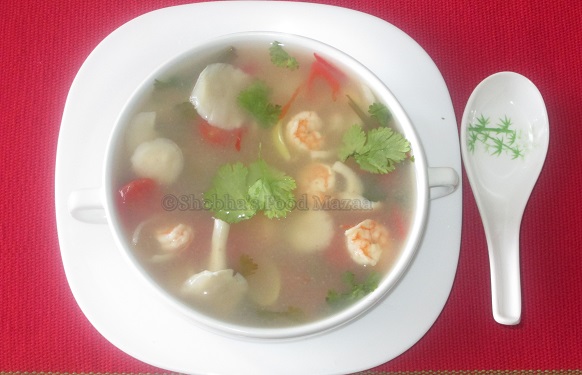 Tom yum soup is a very popular one in the Thai Cuisine.. It is also a street food of Thailand. I love this soup for it's spicy and tangy flavours, a combination of lemon grass, galangal, kaffir lime leaves, Thai chillies etc etc..  Though this soup is usually made with shrimps, you may also try out with any other sea food or chicken
There are two versions of Tom Yum Soup....
Tom yum goong nam sai -  is tom yum with shrimp and clear broth.
Tom yum goong nam khon - is the creamy / milky version.

Method:
1. Take about one litre of water in a pot and bring it to boil.
2. Tip in the galangal, kafir lime leaves, lemon grass stalks and crushed garlic.
3. Simmer and allow it to boil for 10 minutes to release the herb flavours.
4. Now tip in the cleaned shrimps and mushrooms. Crush the chillies and add to the boiling soup.
5. Allow to boil for 2-3 minutes more.
6. Peel the shallots and cut them into halves. Also cut the the cherry tomatoes into halves.Put them into the pot.
7. Next add the fish sauce, sugar, lemon juice and a little salt if needed after tasting because the fish sauce is salty.
8. Boil for one minute and turn off the heat as the tomatoes and shallots should not be over cooked.
9. Add chopped coriander leaves now to retain the freshness and vibrant colour which is lost during the cooking process.
Now you have the clear version of Tom Yum Soup.. 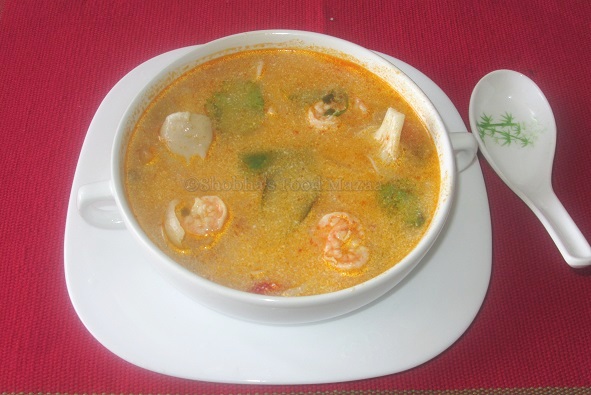 For the creamy version :
After the step 8 ...
Add one tbsp of chilli sauce and stir in the evaporated milk.
Boil for one minute and turn off the heat.
Add the coriander leaves.

Serves 2
Note: The sourness and chillies in this soup should be adjusted according to your preference.
The recipe is adapted from here 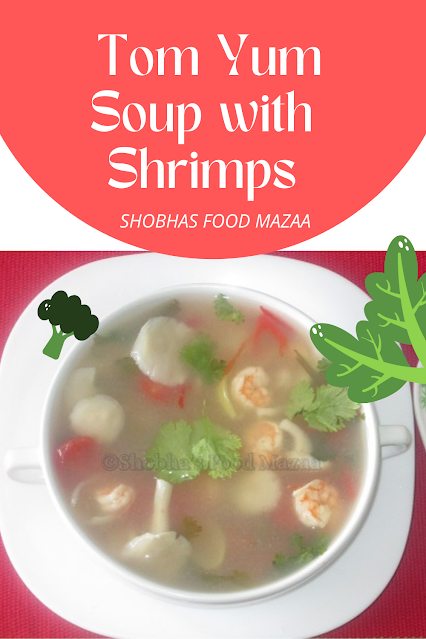 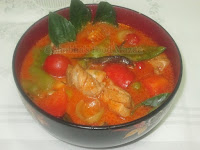 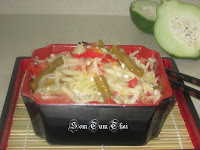