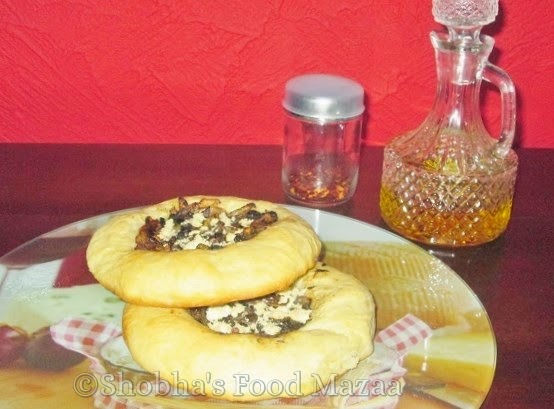 The name Bialy (pronounced Bee-AH-Lee) comes from Bialystocker Kuchen which translates as “bread from Bialystok” which is in Poland. Apparently, Bialys are rarely seen or made in Bialystock these days The Bialy  maybe thought of as a cousin to a Bagel but is quite different from it. For one thing, a Bialy is baked whereas a Bagel is boiled and then baked. A Bialy is round with a depressed middle, not a hole, and typically filled with cooked onions and sometimes poppy seeds. So it is not shiny on the outside with largish puffy bubbles on the inside .Bialys are best when eaten within 5 to 6 hours of making.
In the early 1900s, many Eastern Eurpoeans, including the Polish, immigrated to the US and settled down in New York. Naturally, they also brought their Bialy making skills with them and that is how the New York Bialy became famous.
Bialys usually have a thin layer of caramelised onions and poppy seeds. I have skipped the poppy seeds and used crumbled paneer instead. and added some garam masala to the caramelised onion to give an Indian flavour. You can use whatever filling you would like. Remember the filling needs to be savoury. 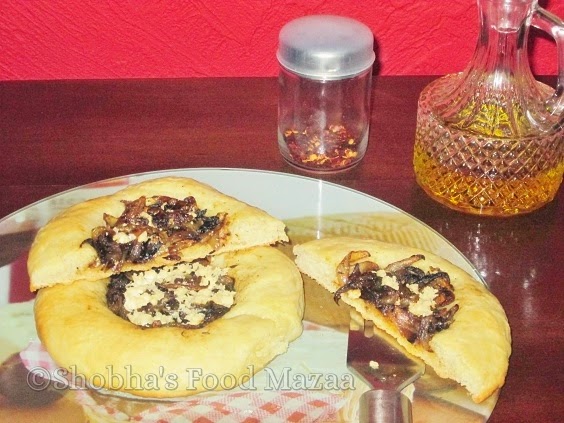 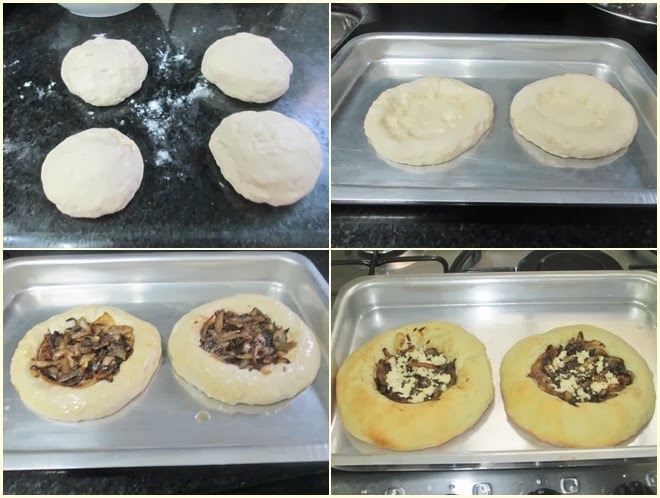 Method:
1. Make a well in the flour and add the crumbled yeast and sugar in the middle.
2. Knead it with warm water and incorporating the yeast and sugar. Add the salt later and knead it well to make a smooth dough.
3. Place it in an oiled dish and cover it with a cling film. Let it rise to double.
4. Meanwhile make the filling. Heat the oil and saute the onions to a golden brown colour.
5. Add the salt and garam masala. Set aside to cool.
6. Crumble the paneer.
7. Take the risen dough. Divide into 4 equal portions.
8. Sprinkle the work surface with a little flour and roll each portion into a smooth ball by kneading and pinching the ends together.
9. Flatten them in the middle with a depression for the filling as shown in the picture.
10. Remember not to press on the edges, or they will flatten out. Once shaped, you should have a depression about 3” in diameter with 1” of puffy dough around the edge, Prick the center of the Bialy with a fork so that it does not rise when baking.
11. Place them on a greased baking tray with a little gap in between them. Put the onion filling in each. Brush the edges with milk. ( add paneer in the last 5 minutes of baking)
12. Bake in the pre-heated oven at 250 degrees C ( 450 degrees F) for 15 - 20 minutes or until light brown.   ( remember to add paneer when the Bialys are almost done )

Note : Remember to refrigerate them if you are not consuming them on the same day.


This is for Aparna Balasubramanian's event - We Knead To Bake # 14 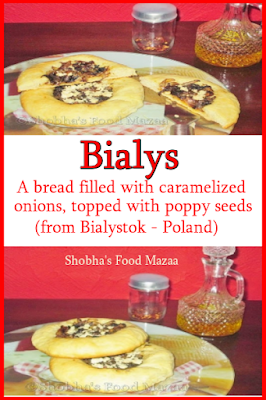 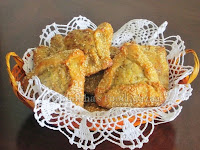 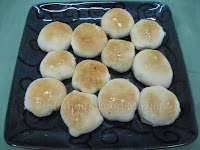 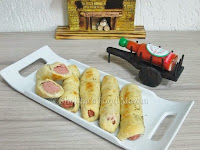 Chicken Sausage Rolls
Posted by Shobha at 10:30 AM