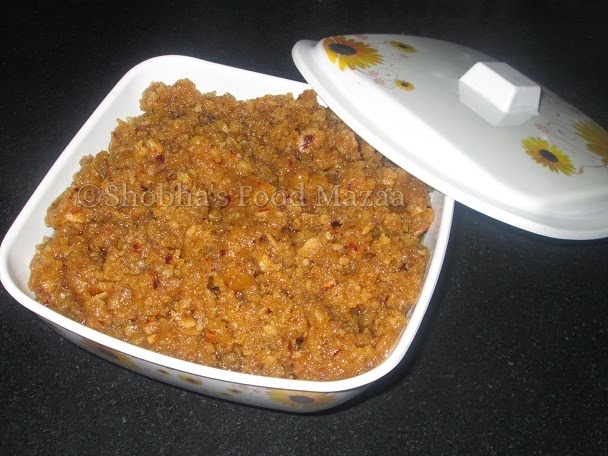 Kutti also known as Bhori  is a traditional Sindhi breakfast made out of crumbled wheat flour rotis to which sugar or jaggery is added. The one made with sugar has a crumbly texture as the sugar is just mixed in the crumbled rotis and hot ghee is poured over it.  Kutti made with jaggery has a soft rexture as the jaggery is melted and added to the crumbled rotis. This can also be made into laddoos which are usually made as an offering for Lord Ganesh.
Kuti is mostly relished in winters and is served with roasted papads.  In Sindhi homes this is considered as one of the rich breakfast dishes like dal /pakwan/ seero. We make it on special occasions. You may add crushed nuts to it if you like. This is also made for lactating mothers post pregnancy with a lot of ghee added to it along with crushed pepper corns and cumin seeds.
Today I have made gur ji kutti / kutti with jaggery which is my personal preference. Here is a step by step pictorial for you. 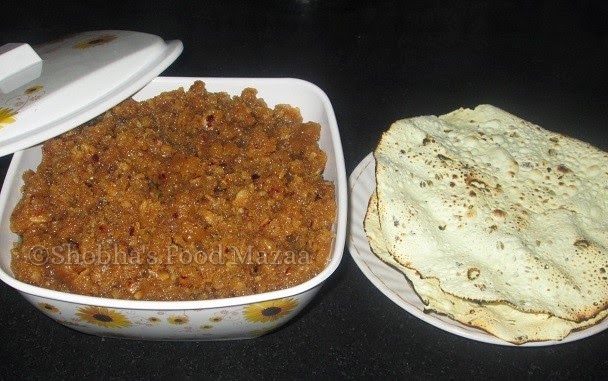 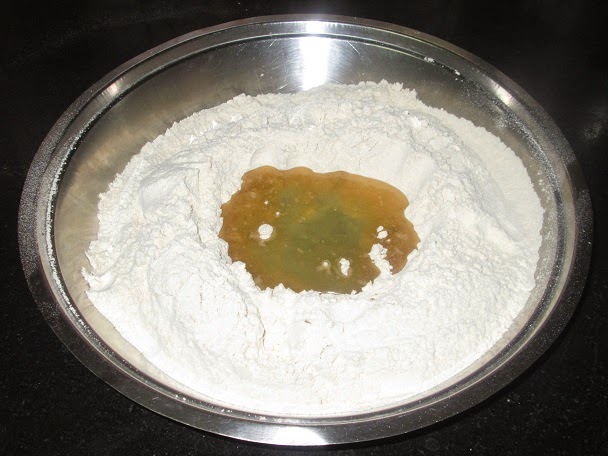 Take the flour in a big plate and make a well in the middle.
Add 3/4 cup of melted ghee. 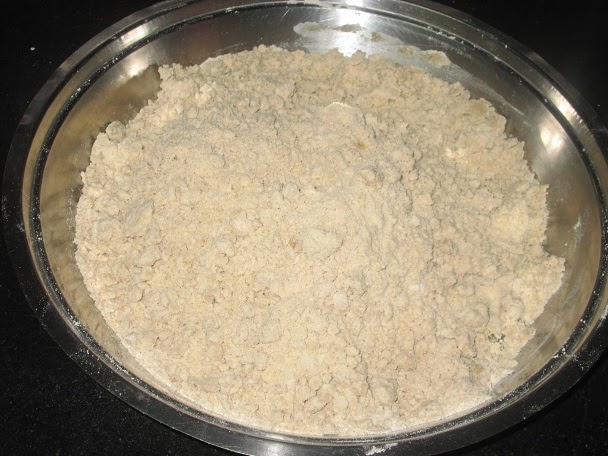 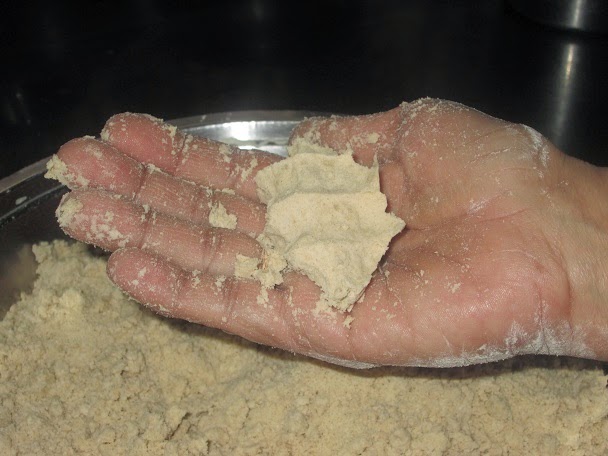 To check whether the moin (ghee added to it ) it sufficient, take a small portion in your palm and press it. If it forms into a lump then it is perfect. 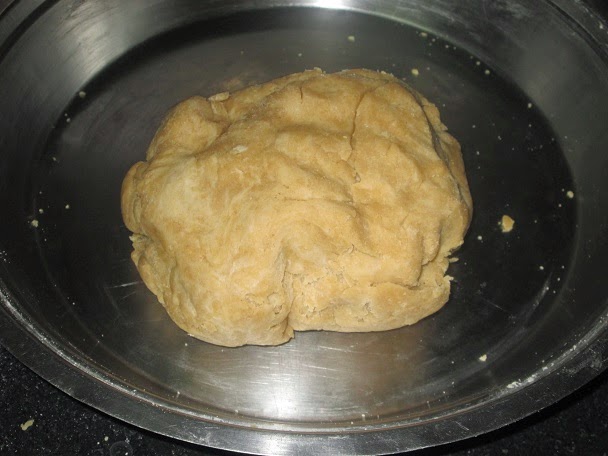 Knead it adding sufficient water to make a stiff dough. 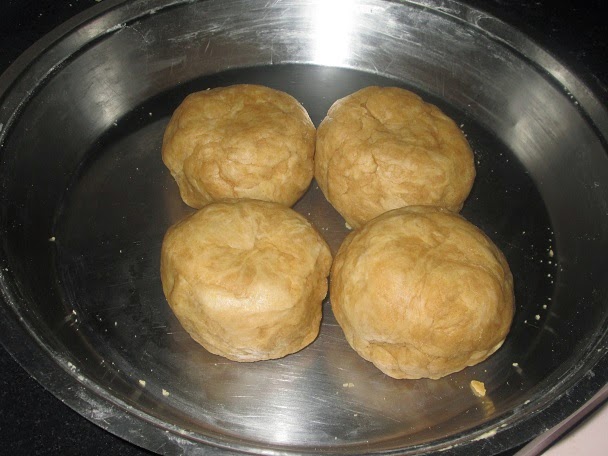 Divide the dough into 4 equal portions. 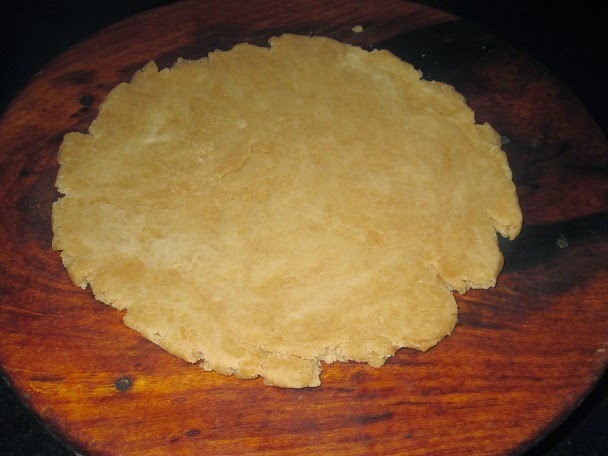 Roll each one into a thick roti. 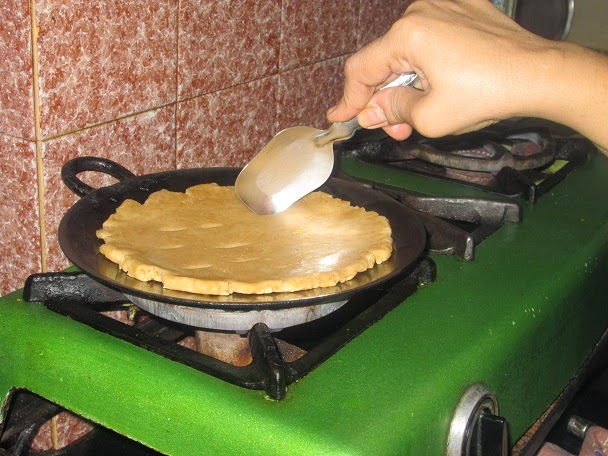 Prick with a spoon or a knife to make incisions on it and roast it on a medium flame turning it a couple of times to cook evenly. 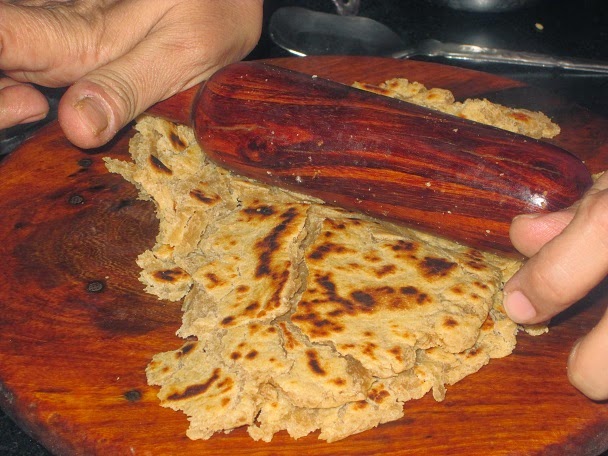 Remove it from the griddle and crumble it using the rolling pin or in a pestle and mortar. 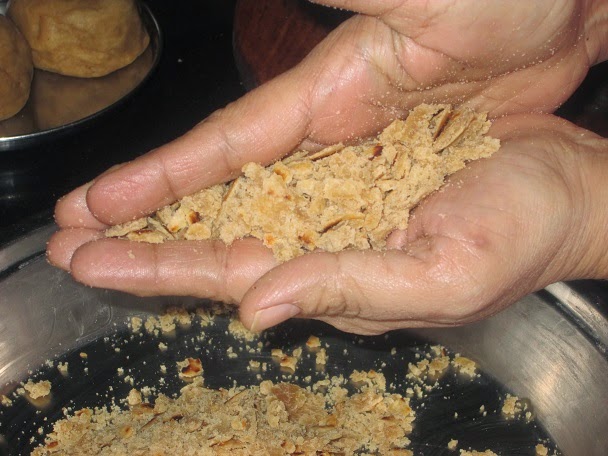 Using your palms crumble it to a fine texture. Repeat the process for all the rotis. 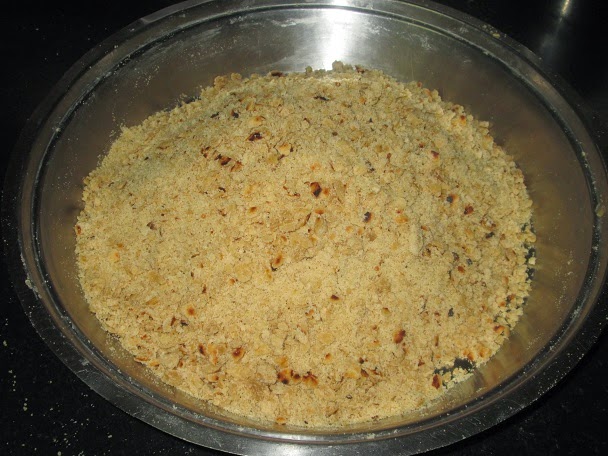 Set it aside in a broad thali. 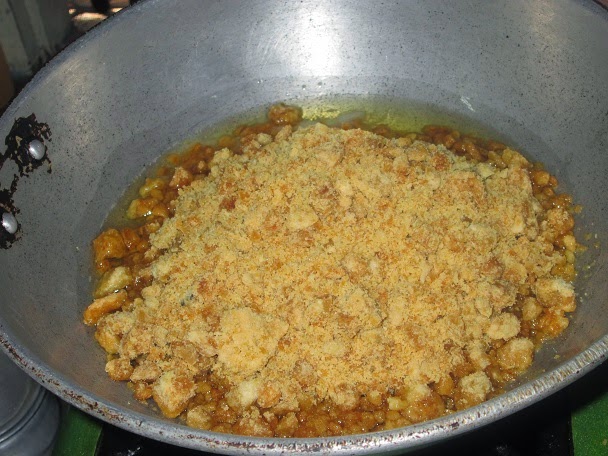 Heat a sauce pan or kadai and add the remaining 1/4 cup ghee. Add the crushed jaggery to it. 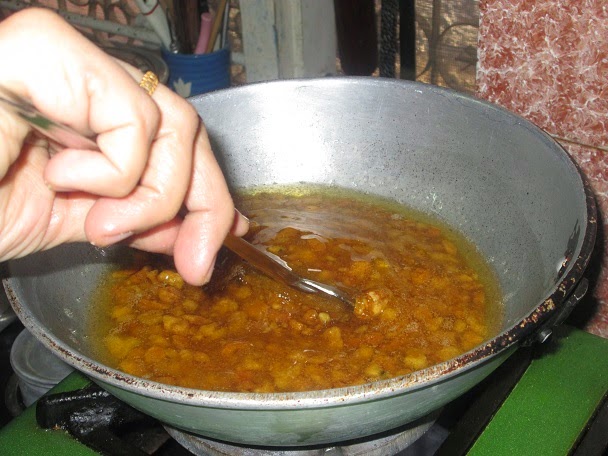 Also add about half cup water and start mixing until the jaggery melts. 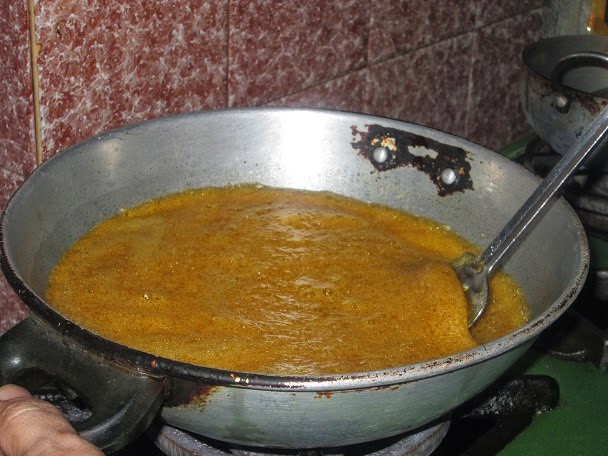 Keep stirring on medium flame until it starts bubbling. 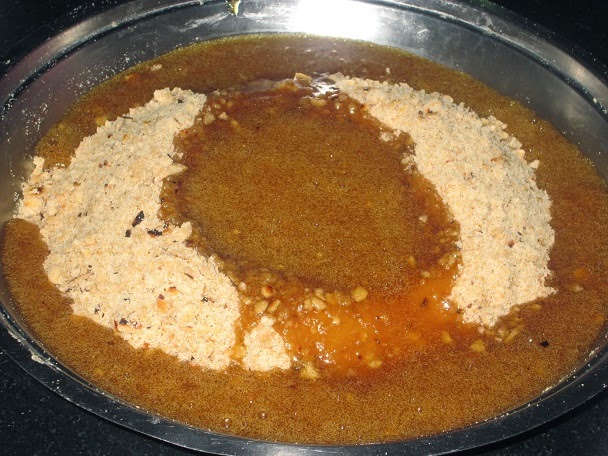 Now pour this little by little to the crumbled roti and keep mixing with a spatula until it is mixed well. 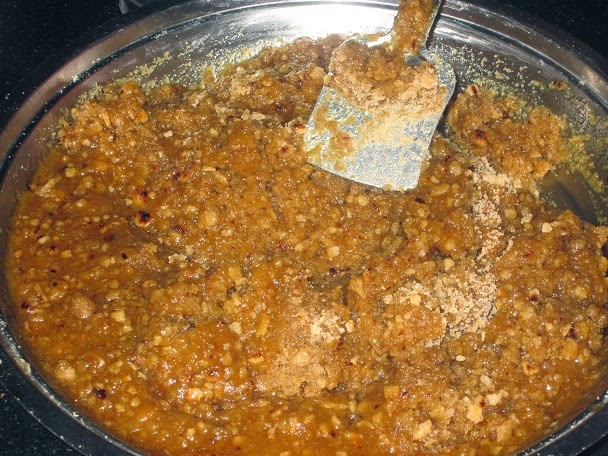 You may find the texture too soft initially but remember that it becomes perfect when it is kept for half an hour or more. If you are serving immediately you may reduce the water quantity. 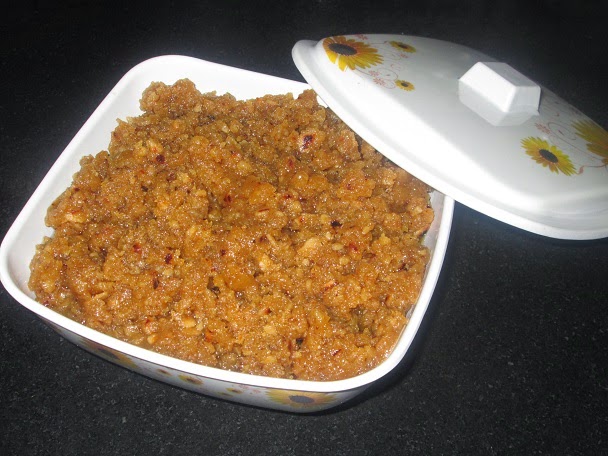 Remove it into a serving dish. This can be served hot or even at the room temperature. You may garnish with chopped nuts if preferrred. 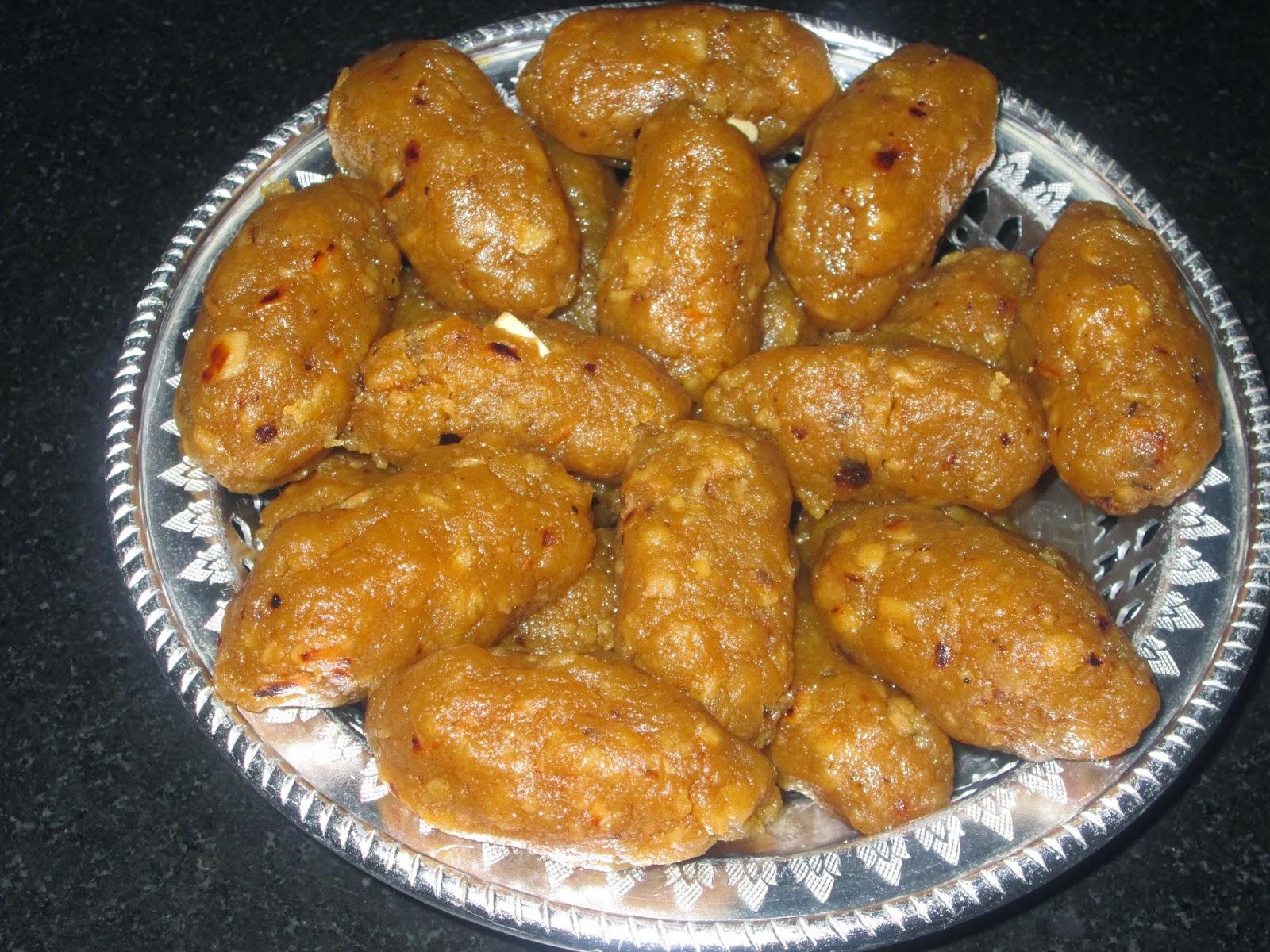 You can also serve them in the oval shaped laddoos. We usually make these laddoos as a prashad / offering to Ganesha on Ganesh Chaturthi. 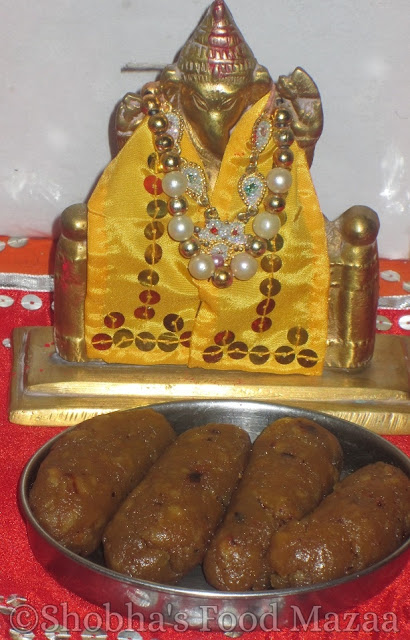 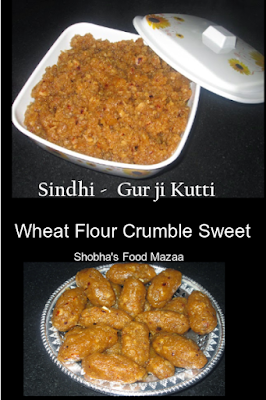 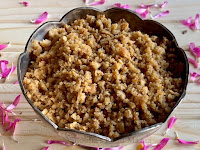 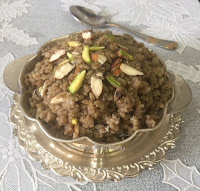