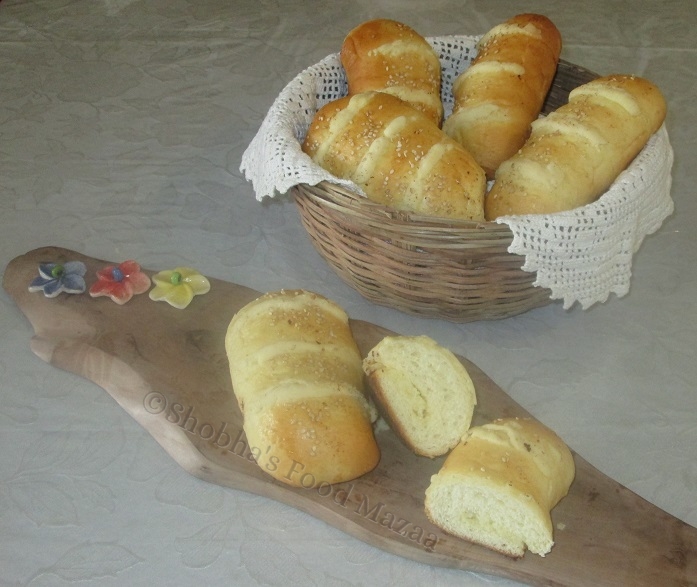 This month in our baking group we’re baking Chinese Cocktail/ Coconut Bunsor Gao Mei Bao. This bun has its origins in Hong Kong and is a sweet bun that is filled with a buttery, milky sweet coconut paste. This bun was supposedly created some time in the 1950s in Hong Kong, when the proprietors when the owners of a local bakery were left with quite a few unsold but perfectly good buns.

The enterprising owners ground them up with sugar to make a filling which was put into freshly baked buns the next day. While the original buns were made with filling made only from left over buns and sugar, more creative bakers eventually added more flavour to the new buns by adding coconut, butter and milk to the filling. This has now become the accepted filling for these Chinese Cocktail/ Coconut Buns.

The “Cocktail” in the name is thought to be a comparison of the rather ‘interesting’ mixture of unusual filling ingredients in the buns to a bartender’s mixture of exotic ingredients that go into creating a cocktail!!

These Buns are typically topped with two stripes and a sprinkling of sesame seeds. ( I had some extra piping mixture so made three stripes) While they’re quite easy to make, you need to make sure the filling is sealed well inside the dough. Otherwise, the seams will open up when the buns rise and the butter in the filling will leak out during baking. 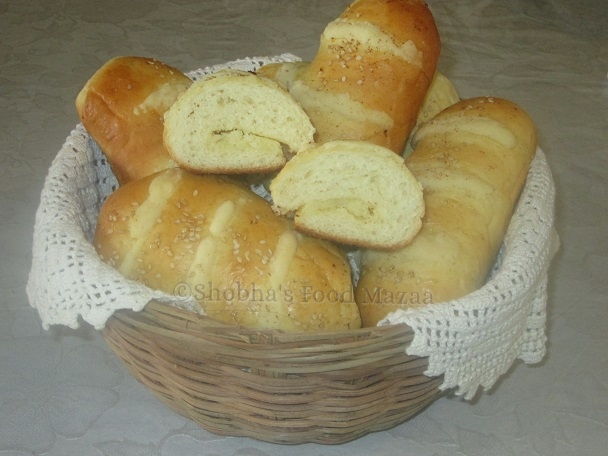 For Brushing:
Milk or egg wash

Mix all the ingredients mentioned in the first list for making the bread dough in a large bowl. 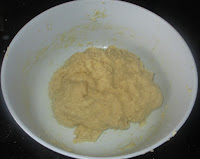 Knead them into a soft dough. You can use the machine if you have it. 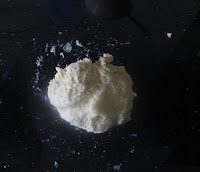 Remove the dough on a floured surface and knead it little more if it is sticky adding a little flour. 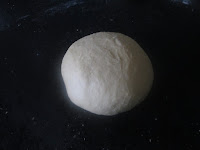 Knead well for a couple of minutes to make it smooth. 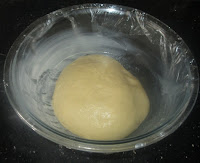 Make a round ball and place it in a greased bowl covered with cling film. 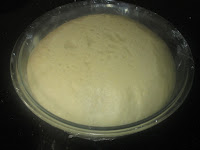 Allow it to rise until double. This takes about an hour and half. (maybe little more in winter) 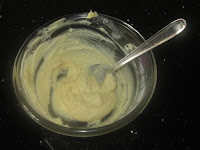 For the topping whisk together the ingredients mentioned in the third list. Set aside. 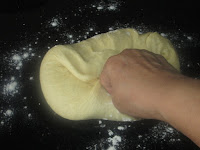 Now remove the risen dough on the working table or platform and deflate it kneading it lightly a couple of times..

Roll it into cylindrical shape and cut into 6 equal portions. 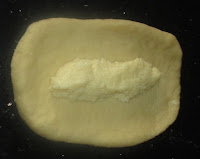 Take each portion and roll it into an oval shape about 4" by 3" long. Divide the filling into 6 equal portions. Spoon a portion on the rolled dough as shown in the picture. 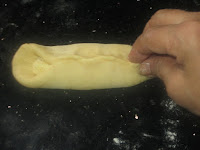 Pinch together the longer sides of the oval dough together and seal the edges. Make sure you pinch it well to avoid the mixture from oozing out while baking. 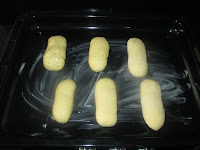 Make all the buns and place them on a greased or lined baking tray with the pinched side down. 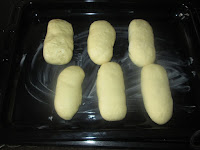 Allow the buns to rise for about 45 minutes. 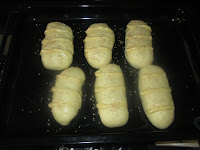 Now brush them with the egg wash or milk. Pipe out 2 or 3  lines on the buns with the prepared topping.. If you don't have a piping bag you can just put the mix into a plastic bag making a conical shape, cut the tip off and use it. Sprinkle some sesame seeds. 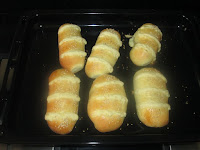 Bake the buns in a pre-heated oven at 180 C ( 350 F) for about 20 - 25 minutes or until done. Remember that the temperature may vary a bit depending on the type / size of the oven. So keep checking.
(if you are using a glaze brush it as soon as they are out of the oven)
Serve warm or at room temperature. 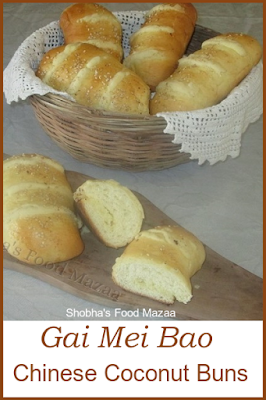 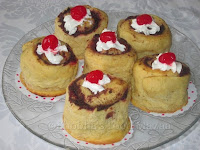 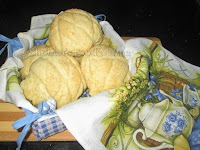